Christ is with You on the Road to Emmaus* 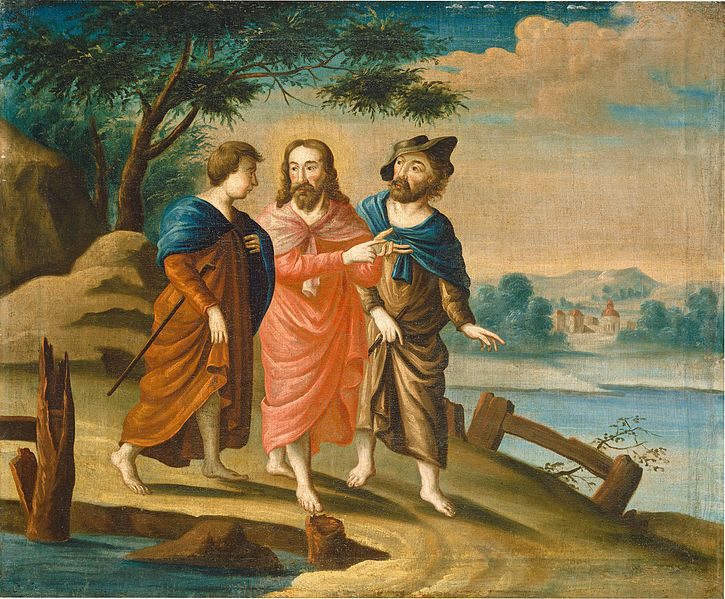 This article was not written by me (drbob), but by my spiritual director, Deacon Tom C.  It is taken from the homily he gave for the Third Sunday of Easter, April 19th,  for which the Gospel reading was about the two travelers to Emmaus.   The message will be an inspiration, I believe, for those of us Catholics following a 12 Step Program, who want to strengthen our trust in God’s providence.  I have added subheadings and links, but otherwise it is as the Deacon wrote it.

Today’s Gospel gives us the scene of the two disciples walking with Jesus on the road to Emmaus. These verses challenge us to look back at our lives and see if we have recognized God in those little moments. I share with you a few times that I have encountered God.

I met my wife in an odd way. My Father had a stroke when I was only twenty-three years old. His two sisters who lived next two us decided to go on a cruise with the local Senior Citizens Agency. They thought that the trip would do my Father a lot of good, so they asked me to go with him. So in October of that year we took a bus and set off on what I thought would be a long boring week with people who were in their 70’s. and 80’s.

It was on this cruise that I met my wife. She and her four friends were booked on a cruise earlies that year but she had appendicitis and they had to cancel that cruise and they too, ended on this senior citizen’s cruise. It was love and first sight and we got married two years later. We are still married.

After we were married, we found out that we were unable to have children. We accepted this sad news and thought that someday we would adopt a child. The strangest thing happened. Against all medical prognosis, we conceived a child. Our physician could not explain how this happened.

One of the happiest days of my life is when my wife delivered our first son. It was incredible to see his face the first time. I held him in my arms and couldn’t get over how beautiful he was with his small fingers and toes. I saw creation right before my eyes. I had the same great joy and amazement at the birth of our second child two years later.

During our middle years of marriage my wife developed this pain in her stomach. The doctors took all type of x-rays and other medical diagnoses. Nothing showed up on any of these tests. The doctors were frustrated and recommended that the only way to determine the cause of the pain was to do exploratory surgery. We never discussed it but we figured out that they were looking for cancer. Our pastor came with me to the surgery and we waited for the surgeon to come out of the operating room to tell us the bad news. He, was there to support me when the bad news arrived. I prepared myself and he came out and shared with us the results of the surgery. He said, “It wasn’t cancer.” I learned that from a prior surgery adhesion had grown around one of her organs and it was this reason she was having the pains. They removed the adhesions and she was on the way to recovery.

[Peace be with you, I am your Lord and Your God.]

A Highway Miracle and a Lesson

There was an incident one time when my wife and I were driving home on Sunday from a retreat center in western PA. The road was this back country road with only two lanes. The speed limit was only 45 miles per hour. On the road in front of us we came upon a car in front of us. Whoever was driving enjoyed the drive because the car was going around 30 miles per hour. The only problem was that that the two-lane road had no passing lanes mile after mile, after mile. I knew I had to get home and keeping behind this car was getting on my nerves and the longer we went, the more upset I became. We came upon a straight part of the road, and I gently moved into the left lane to see if any cars were coming in the other direction. I didn’t see anything coming so I drifted into the left lane and put my foot to the metal and gained speed very quickly. I guest our speed was around 55 miles per hour when all of a sudden there was a car heading right at me in the lane. I had no idea where it came from since I did look and there was no car in this lane. My life flashed before me and I could see the headlines in the newspapers that I was blamed for the death of the mother, father, son, and daughter in the other car and my wife and my lives. I was charged after the fact with passing illegally on a no passing lane and it was due to these actions that six people were killed.

The police identified that there was visual mirage where I passed. There was a dip in the road and when I looked to see if any care was coming, I indeed didn’t see any car because it was hidden in the dip in the terrain.
However, the oddest thing happened. The moment before the cars’ impact, my car went to the left into the berm and both cars passed each other only inches apart. Nobody died that day, but I learned a lesson never to try to pass on a two lane no passing road.

[Peace be with you, I am your Lord and Your God.]

I have enjoyed talking with you, but I must go now. Since I am getting up in age, I hope someday that I will grow in my faith. I will try to believe harder that a priest truly has the ability to change simple bread and wine into the true Body and Blood of Christ. I just hope, like in today’s Gospel, that Jesus comes to me like he did with the two disciples on the road to Emmaus.

The Gospel today makes us ask ourselves one fundamental question, an essential question in the Easter Season: how would you react if Jesus appeared to you?

Would you recognize him? the wounds in his hands and feet to show that his suffering wasn’t just a dream, it really happened, and, in spite of that, he wants peace with us (see John 20:19-21).