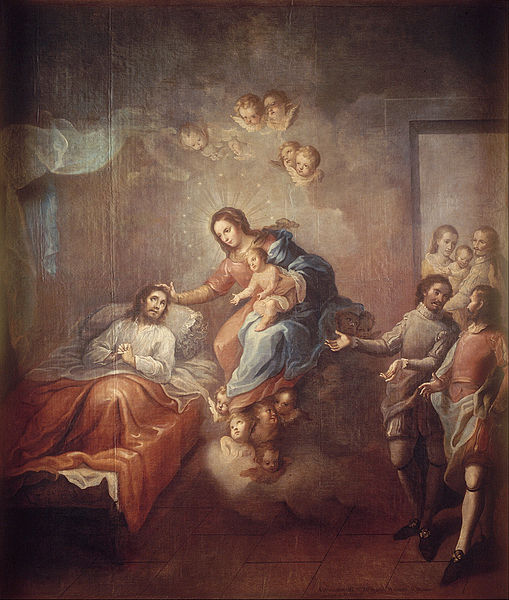 (The  featured image is “The Conversion of St. Ignatius of Loyola” by Miguel Cabrera, from Wikimedia Commons)

STEP 10: Continued to take personal inventory and when we were wrong promptly admitted it.”

What does the term “personal inventory” signify for a faithful Catholic?   I’ve been to several online Calix Society meetings this week, and folks have shared several interpretations, ranging from daily Sacrament of Reconciliation to apologizing to people when we’ve been unjustifiably angry.    As for me, I believe the Examen is possibly the best Catholic link to Step 10.   So, let’s focus on that in this article.

What is the “Examen?”  As part of the night prayer (“compline”) of the liturgy of the hours, one reads “a brief examination of conscience.”  A dictionary definition (Lexico, by Oxford) gives:

(especially among Jesuits) a devotional exercise involving reflection on and moral evaluation of one’s thoughts and conduct, typically performed on a daily basis.

According to the Jesuit website, Ignatianspirituality.com, the nightly Examen should have five parts:

1. Become aware of God’s presence.
2. Review the day with gratitude.
3. Pay attention to your emotions.
4. Choose one feature of the day and pray from it.
5. Look toward tomorrow.

Let’s look at these parts of the Examen.

Number 1 suggests that we ask God to make known His will, as in Psalm 142 (Hebrew numbering, 143). (Psalm 142 is a regular in the Tuesday night prayer (compline) in the Divine Office, and occurs elsewhere in this devotional.)

“Cause me to hear thy mercy in the morning; for in thee have I hoped. Make the way known to me, wherein I should walk: for I have lifted up my soul to thee”.—PSALM 142:8, Douay-Rheims

Number 2 asks us to thank God for His gifts to us.  We need to be grateful to the Holy Spirit for those times during the day grace has been given to us, and to examine those occasions when we were in need of grace.

Number 3  suggests that not only deeds, but feelings are important.   See this article by Fr. George Aschenbrenner, where he  discusses the two forces prompting “good” and “bad” feelings, the Holy Spirit and the Evil One.   Discernment  is necessary to discover when depression, hate, etc. is being initiated by Satan or his agents.  (See also C.S. Lewis’s “The Screwtape Letters.”) There are methods given in “The Spiritual Exercises” to overcome the downers, but to explore that would take another article or book.

Number 4 asks us to focus, to concentrate our efforts on one particular sin (venial or mortal) or defect of character, and then to go on to others.  Such focusing is more likely to succeed than dissipating our energies on many faults.

Number 5 “looks to the future.”   What we do tomorrow is more important than what we did yesterday, for, as Jesus has said, “Every sin and blasphemy shall be forgiven men.” (Matt: 12:31, Douay-Rheims)

And, if we have worked through the Steps up to 10, then we have done what is required in Steps 4-9 to enable us to move into the future.

Let’s turn now to how St. Ignatius would have us work the Examen, as he described it in “Spiritual Exercises.”

St. Ignatius prescribes a more complicated regimen for the Examen than a simple evening examination of Conscience. One is to follow a daily order of prayer and reflection:

St. Ignatius requires that one keeps a record to determine progress in eliminating the sin:  writing down lines of letters (c’s) in decreasing size per line.   The lines compare hour by hour during the day,  day by day during the week, and week by week.

I found St. Ignatius’s general ideas about the examination of conscience  particularly meaningful:

“I presuppose that there are three kinds of thoughts in me: that is, one my own, which springs from my mere liberty and will; and two others, which come from without, one from the good spirit, and the other from the bad.
THOUGHT
There are two ways of meriting in the bad thought which comes from without, namely:
First Way. A thought of committing a mortal sin, which thought I resist immediately and it remains conquered.
Second Way. The second way of meriting is: When that same bad thought comes to me and I resist it, and it returns to me again and again, and I always resist, until it is conquered.
This second way is more meritorious than the first.”—St. Ignatius of Loyola. “The Spiritual Exercises of St. Ignatius of Loyola.” Apple Books, p. 41

There is more in this section, also of value: how to  distinguish between venial and mortal sins, and how to prepare for Confession.

During this last month of studying “The Spiritual Exercises,”  i haven’t been the most assiduous student.  (That longer story I’m saving for the Confessional.)   Even so, climbing the hill lets me look on the plain below.  It is as if  I were again learning about thermodynamics or quantum mechanics—at first the concepts are strange and not all that intelligible, but then as I begin to reflect on them and use them, everything falls into its proper place, like pieces in a jigsaw puzzle (for thermo and QM,  this growth in understanding took not months, but years).

The Sunday and Tuesday online Calix Society meeting are using “A 12 Step Approach to the Spiritual Exercises of St. Ignatius,” by Fr. Jim Harbaugh, S.J., to give topics for discussion and as a springboard for sharing.   These are very valuable, but I’m always of a mind to go to the primary sources, even though there may be heavy slogging through unfamiliar language patterns.

Finally, blog posts are to be a jumping off place for discussion, as in an online meeting.   Please comment (but be gentle).