Catholic Faith and The 12 Steps:
A Parable from Molecular Biology 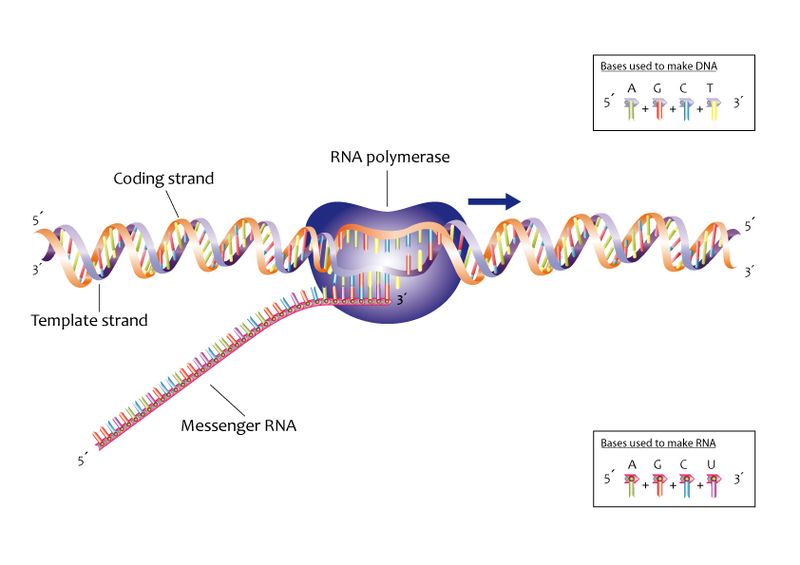 Jesus used parables to make complicated ideas simple and familiar to his audience: analogies from agriculture, buying and selling, material things.  I myself have found scientific analogies to be enlightening,   One such is Christ as the Light of the World.   Another is The Trinity as a Quantum Superposition. And here’s yet another one drawn from molecular biology.

This analogy or parable was inspired by a comment in a reading at a Maine Sunday night Zoom Calix meeting: Catholic Faith and the Twelve Steps were like the double helix of DNA.   I jumped on that, Wow!   And then, after reflection, thought. “it’s not altogether apt.”  The two DNA strands of the double helix are equal, but Catholic Faith is much more than The Twelve Steps, significant as those might be.  However, there is an aspect of the molecular biology analogy that does strike home; we in the Calix Society integrate the 12 Steps with Catholic teaching, as I’ll try to show below.

In order for the parable to make sense, some background is required:   how proteins are synthesized from the DNA blueprint, what is termed “gene expression. It is this process that determines our heredity, whether we have hazel or blue eyes, whether we are LeBron James or Einstein. l’l; give just a brief summary here of gene expression–transcription and translation.   A graphic account is given in the video below from yourgenome.org:  More detailed accounts are given in the linked web sites.    In the Appendix below there’s a more detailed description of the chemistry of DNA, how the two strands are held together and how the chemistry enables coding information.

RNA polymerase unzips the double strand and attaches complementary bases to single strand RNA.   See  here.   Note that the RNA polymerase is a large protein, much bigger than the DNA strand.   Also note that one strand of the DNA serves as a “template”–bases complementary to bases in the template strand are linked, e.g. G to C,  C to G,  A to T,  U to A, and as they’re linked they detach to yield mRNA (messenger RNA).   See the Appendix below for more information about the DNA bases, A (adenine), C (Cytosine), G (Guanine), T (Thymine), the four letters for DNA coding and how they’re used as structural elements..

mRNA leaves the cell nucleus, goes into the cytoplasm where it attaches to a ribosome, where protein synthesis occurs.   In the process transfer RNA molecules are sent by the ribosome to attach specific amino acids, coded by the m-RNA, to form a protein.

OK, so that’s the parable…what does it have to do with Catholic teaching and The Twelve Steps?    Here’s my interpretation.   Catholic Teaching is represented as the DNA double helix;  the 12 Steps are represented as messenger RNA sent out a blueprint for protein, that is to say, the principles by which we should live our daily lives;  the Calix Society is represented as RNA polymerase, the agent that brings Catholic teaching and the 12 Steps together.  Forced?   Unlikely?  Maybe so.   But let’s hear some comments about that.

MOLECULAR BIOLOGY: DNA AS AGENT FOR INFORMATION, SOME CHEMISTRY

Since I don’t expect most readers of this blog to know all that much about molecular biology, I’ll give some  background. I apologize for possibly being overly technical, but it bears on the analogy.  First, let’s summarize the salient points of DNA biochemistry: what holds the two strands together and how coding for building proteins is enabled. For more details, please see this post:, “God’s Gift to Molecular Biology—The Hydrogen Bond.”

Let’s imagine God thinking in his design of nature, I want to have a biological molecule that can be used to transmit lots of information, that can be replicated easily and be used as a  messenger.  For the chemistry, there should  not only strong interactions between atoms–call them chemical bonds—but also gentle ones:  so that complicated structures can unfold and rewind easily, and so that big and small molecules can come together and join for reactions and go apart readily–Velcro or a zipper, not glue or nails.   What should I use?  I have it–a hydrogen bond.

Now I want to go further in imagining God’s design of DNA.   “Let’s see, I want molecules that will fit together. so they should have these OH, NH, O: and N:  pieces.   How about these organic bases, adenine (A), cytosine (C), guanine (G) and thymine (T),

Watson (or was it Crick?) in a moment of insight noticed that the bases matched each other by hydrogen bonding like pieces in a jig-saw puzzle.   They could thus stabilize a helical structure, by links across the spiral, as shown below.

These bases are attached to sugar-type pieces, which in turn have phosphate groups on them that form the links between base units.   The hydrogen bonds linking base pairs are strong enough to hold together the two DNA strands in the spiral helix, but 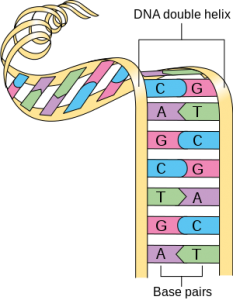 weak enough that they can be “unzipped” by mild chemical action, for example, the enzyme RNA polymerase, which yields messenger RNA.

Now let’s go further in our imagination.   God wants to make a molecular device to transmit information, that can be copied and sent as a message and that can be passed.  He’s going to use the bases, A, C, G, T, as letters in a three letter word, a codon.. From four different letters you can 4^3=64 different three letter words. That’ll be more than enough to code for the  20 different amino acids that are the building blocks of proteins.  And some words for signals, begin, stop, etc.  And the human genome contains 3 billion base pairs, about the same number as in sharks, so that’ll certainly be sufficient to code for humans, with lots left over for surprises.

And so, dear reader that’s the molecular biology lesson for today.   More remarkable I believe, than  the story of the creation of the elements, stars and galaxies.